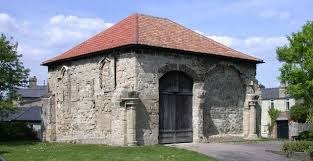 The Cellarer was the second most important position within a monastery after the Abbot, dealing with the sourcing of provisions and other supplies for the community. He would have assistants to help with his duties. He needed to have a good head for figures as he would have to work out costings and forward plan, checking weekly expenditure in the kitchens. The Chequer is the building where the Cellarer conducted his business and comes from Exchequer which was the government office responsible for collecting revenue. As you can see on the layout, the Cellarer’s Chequer is presumed to have been constructed close to the Kitchen, Parlour and Frater (Refectory) so that the Cellarer could oversee the work that was going on. It was also the trading point for the monastery where deals were made with suppliers.

The Cellarer’s Chequer is on the site of Barnwell Priory. There is speculation over the name ‘Barnwell’ or ‘Barnewell’ which may have come from the clear springs in the area where children met on St John the Baptist’s Eve to play games. This became ‘Bairns Well’ and, as it was an annual event, attracted crowds of buyers and sellers to do business. This activity was a precursor to the Midsummer Fair and may have led to the establishment of that annual event. The Priory was for Augustinian Canons Regular, Roman Catholic priests living in a community. It was once one of the most prosperous religious complexes in the country, and some of the roads close by are aptly named to reflect this - Abbey, Priory and Beche (from Everard de Beche, a distinguished soldier who was involved with rebuilding the Abbey).

The Priory was founded in 1092 near to Cambridge Castle, the area to the north of the city close to where Shire Hall currently stands, and was moved to this location in 1112. However, it was not until 1190 that the priory church of St Andrew-the-Less was finished and consecrated. The church is now more readily accessed from Newmarket Road and has lost its direct physical connection with the remains of the Priory.

Barnwell Priory had strong links with the Midsummer Fair which was granted a charter by King John in 1211 and assured the prosperity of the Abbey until 1506 when control of the fair transferred to the town officials. There are other streets nearby that continue the link with the fair through their names, for example Garlic Row, Oyster Row and Mercer’s Row. As well as King John, other monarchs are said to have stayed at the Abbey including Henry III and Edward I.

The Priory went through a series of extensive rebuilds during the 13th century and was surrendered to the Crown in 1538 when Thomas Cromwell, as Chief Minister to Henry VIII, ordered its destruction during the Dissolution of the Monasteries.

Towards the end of the 16th century, the land was being used as a quarry, with some of the stone being used for Corpus Christi College Chapel. The Cellarer’s Chequer and the church of St Andrew-the-Less are the only original buildings still left standing. The Cellarer’s Chequer is constructed from Barnack stone with a tiled roof. It is in Early English style and is contemporary with the changes made to the Priory by Everard de Beche in the mid-13th century. It still retains its 13th century doorway, several windows and a fireplace. Inside it has a stone, vaulted ceiling supported by a central pillar, and there are fragments of carved masonry, coffins and lids. The property is owned by Cambridge City Council and is a grade II* listed building.

Book your swim now! Social distancing rules will apply, and you can swim for up to one hour